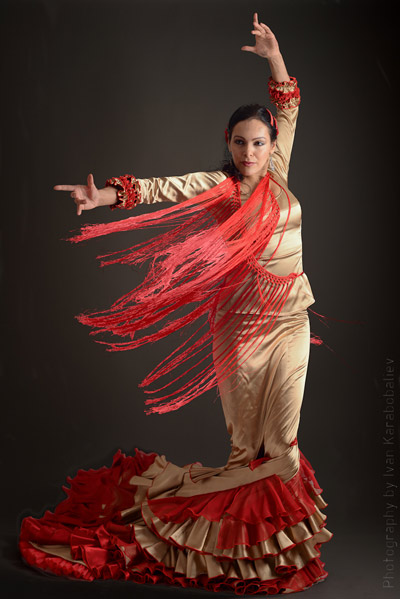 An International performing artist, Fiona Malena tours frequently with her ensemble and as a guest artist worldwide; including Israel, Canada, Spain, the United States, Mexico and the United Kingdom. She has collaborated on stage with many top Flamenco performers such as Ramón Martínez, El Torombo, Juan Ogalla and Pedro Sierra. Fiona received her training and formation as a dancer in Seville, Spain under the mentorship of Farruquito, Concha Vargas and Isabel Bayón, among others.

Fiona began choreographing new works for the stage in 2001 and most recently toured “Eclipse” (Vancouver International Flamenco Festival, 2012). Noted past performances include the Alcázar palaces of Jerez de la Frontera and Seville, Spain and various other International Flamenco Festivals, where she has opened for esteemed dancers such as Rubén Olmo and Manuel Liñan. She is very active performing in Southern Spain with her ensemble and upcoming performances include Peña Flamenca Enrique el Mellizo in Cádiz. Rooted in the tradition of flamenco, the ensemble blends world-music, rhythms and unique instrumentation such as the Hang drum. Their performances have recently led to consecutive sold-out concerts in Spain.

This summer Fiona will be touring through 6 cities in the UK and also Western Canada in the fall with her new production “Puertas”. Further information can be found on her website: www.fionamalena.com