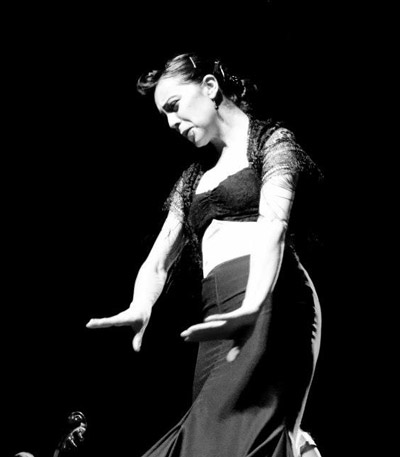 Melisa Calero was born in Cordoba and began her career in Cordoba in the “Tablao El Cardenal”.
She has studied with renowned dancers: Daniel Navarro, Rosario Toledo, Israel Galvan, Belen
Maya, Milagros Menjibar, Isabel Bayon, among many others.
In 2003, Melisa won the 1st prize of the “Concurso de Marbella” and in 2005, the 1st prize of the
“Concurso Nacional Villa de Mijas”.
She has performed in many notable flamenco festivals: Festival de Flamenco Empirico in 2013
(Barcelona) with “Nostalgia”, including in 2008 in the Bienal de Sevilla, in 2009 the XXI Festival
de Mont de Marsans with her show “Ropa Tendia”, and the Festival de Teatro “Calleteando” in
Cordoba, in 2010 in the “Noche Blanca del Flamenco de Cordoba”. In 2010 and 2011 Melisa
worked with Leonor Leal in Opera Carmen de Bizet at the famous Villamarta Theatre in Jerez.
She has danced and taught around tha world, including Italy, Lebanon, Morocco, Tunisia, Moscow,
Turkey, London and Paris.
Currently she has debuted in Sevilla with the new show “Deliriuum”.